Pnina Galili remembers how she and her sick mother were arrested during the night:

They said that we just had to go for a passport control at the police station because my mother had a Polish passport. Since my mother was in bed with a temperature of 38.5 degrees, I asked the police officer whether I could go on my own with them to spare my mother the journey. However that didn’t help at all; we both had to go. When I asked them why we had to go to the police station at that time and why not later and whether there was anything useful we should take along, the policemen yelled at me and said amongst themselves, this little girl is cheeky, and that I needed to be disciplined. This kind of so-called ‘passport control’ still goes on today.

In Zbąszyń, Paula and Klara soon got to know other young people with whom they organised active help for the other refugees. When the two young girls were able to leave the refugee camp with the first Kindertransport, Paula was given a parting gift from a young man from Bonn: a handkerchief, similar to those that were bought by many of the refugees in Zbąszyń with a personal (embroidered) dedication for people who were close to them.

Samuel Drong, born on 14 August 1920, ended up in the Nazi extermination machine in Eastern Europe and did not survive.
< return | forward > 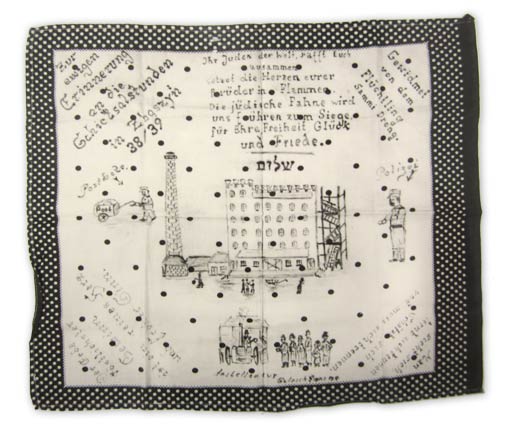