On 14 May 1940, a few hours before the surrender of the Netherlands, the cargo vessel SS Bodegraven departed from Ijmuiden. In the hold, 74 Jewish children and young people were hiding; almost all of them came from the Amsterdam orphanage „Burgerweeshuis”. After five days under attack from German aircraft, the ship finally reached Liverpool. Among those rescued was 15-year-old Dora Unger from Essen.

Dora Unger had come to the Netherlands, together with her parents and her brother, in November 1938 in a dramatic escape across the border. In the Netherlands, Dora was housed in an orphanage. The rescue of the children from the Burgerweeshuis succeeded because of Truus Wijsmuller-Meijer’s decisive action. In collaboration with Dutch refugee committees, she managed to rescue thousands of children from German territory and send them abroad.

Mrs. Wijsmuller came into the Burgerweeshuis and said that we should get dressed very quickly. We drove off in a bus and until we reached Ijmuiden, I thought we were just going on a trip. When we passed my parent’s home, I wanted to get out, but the bus did not stop. On board the ship we first thought that Mrs Wijsmuller would come with us, but she said she had to stay and help other people. *
< return | forward > 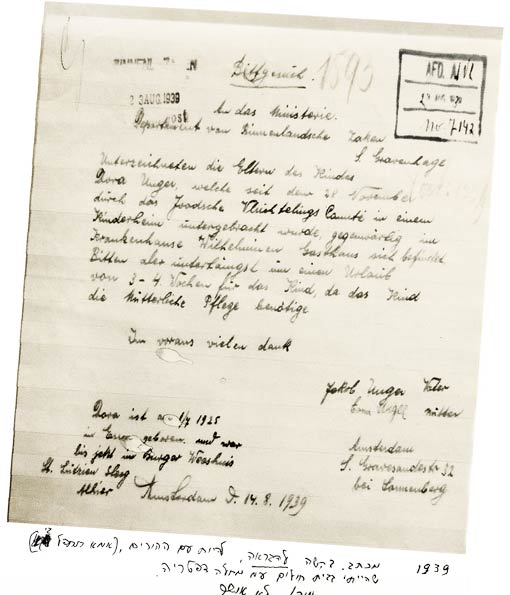 Petition from the parents of Dora Unger, August 1939.
Picture above: Children of Burgerweeshuis Amsterdam, before May 1940.
Photo Credit: Courtesy of Dora Scheinowitz.